The main pull of this theory is that Sasuke's Rinnegan is an intermediate between Kaguya's own Rinne Sharingan and Hagoromo's Rinnegan.

I will not be using any information granted outside of the original publication, Chapters 1-700.

Sasuke's Rinnegan could be said to be the merging of Chakra within his body, manifesting power similar to the Sage of Six Paths and thus manifesting Rinnegan.

As described by the story, in chapter 671, it requires the Chakra of Asura and Indra to manifest a byproduct of Hagoromo's Chakra, the Rinnegan.

To awaken the Rinnegan, Sasuke would require both.

Sasuke is a natural transmigrate of Indra, as detailed in the same chapter (671).

For Asura's, there are three possible instances where Sasuke could have acquired his Chakra. However, I will only be focusing on the one most releavent for this theory.

In chapter 644, Naruto had used his connection with everyone's Chakra to help his father transport them outside Ten-Tails Jinchuriki Obito's Uchiha Flame Formation Barrier. In doing so he infused his Chakra within Sasuke and Jugo, who hadn't been linked with him prior. Sasuke would later visually lose this cloak, however. Though that doesn't mean Naruto's Chakra would have vanished from his body. Tobirama describes this phenomenon. 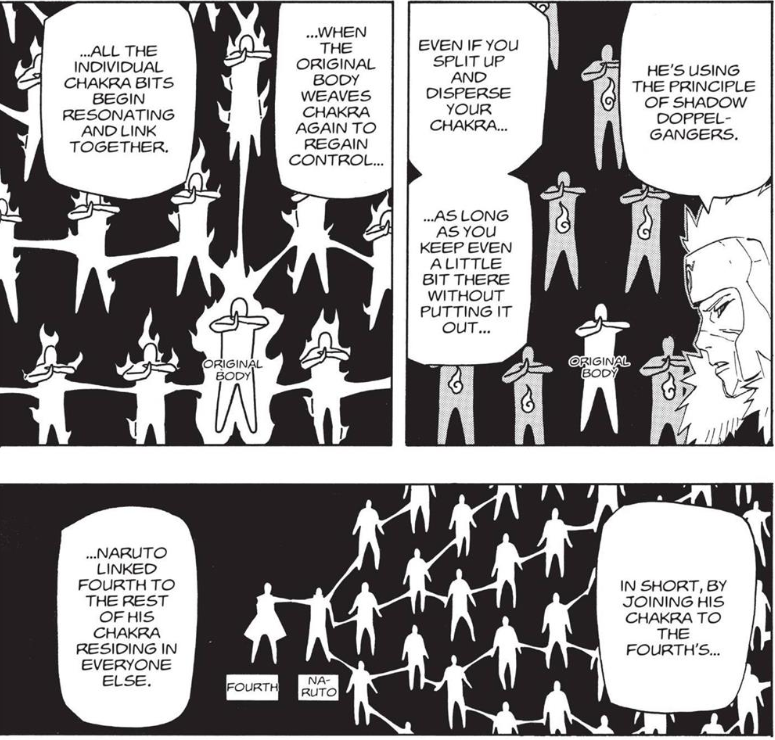 Hence, even if the cloak visually vanishes, it does not mean their power in truth has.

What's important is not only Naruto's Chakra's present, and therefore Asura's, but Kurama's Chakra is as well.

Kurama has details that closely relate him to Kaguya, seemingly being the closest Tailed Beast to match her quality.
His Chakra Mode's shares similar patterns to her own, (680 & 684) And when Hagoromo speaks about his ability to manifest, what he normally describes to Ten-Tails, he shifts to Kurama. (686) I'm very confident in sharing my speculation that Kurama has the largest tie to Kaguya and Hagoromo, to the point he can be defined as a key aspect of their Chakra, more so Kaguya.

And its with these pieces of information I formulate this theory. I conclude Sasuke manifested his unique Tomoe Rinnegan through the mixture of Asura, Indra, and Kurama's Chakra within his body, and thus manifested a Chakra closer to Kaguya's own than Hagoromo's.

This would partiality explain how his base stats grew to such a high level, while manifesting a Rinnegan that at birth could execute 9 simultaneous Catastrophic Planetary Constructions. Kurama's power in some regard joining with his own would have dramatically increased the potency of his Chakra.